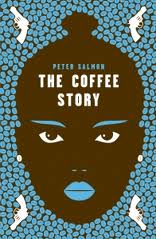 The Coffee Story by Peter Salmon is a death-bed confessional of Teddy Everett, the last of a dynasty of coffee barons. It recounts his coffee story, or rather a number of significant moments in his life with and around coffee.  It is story about the bitterness of regret and the feeling of being a traitor. Over the course of the novel, we learn that Teddy has had two wives, was raised in Ethiopia, just before the Italians came and lived in Cuba, just before the revolution. Over the course of his life he has been an important man, linked with the likes of Howard Hughes and William Hearst.  But now, he is dying of lung cancer in a prison hospital, and making his final confession, to no one in particular. This is his coffee story.

I came across this book at the 2011 Melbourne Writers’ Festival when I attended a couple of sessions when the author read from his book. (He was good enough to sign my copy afterward too.) I was intrigued by the interesting writing style employed by Salmon. It is a rambling, conversational style of writing. During the Q & A, Salmon said that he quite deliberately set out to tell the story in the voice of someone who is not a writer, and so not conforming to ‘accepted’ narrative norms. The story is non-linear for a start. Moving from thought to thought in a haphazard way, often sliding off into tangents, regularly repeating some sections of the story (especially parts which turn out to be of vital importance to him), sometimes stopping abruptly to bring us back to the present and his current set of circumstances.

The book is also full of sex, but without any sentiment behind it. The frequent sex scene are very direct and use quite strong, yet dispassionate language to convey. Sex does not equal joy, or love, or affection to Teddy. In fact he is far more eloquent and sensual when in talks about coffee, and the pleasures that a good cup of coffee can bring.

I liked this book. Although to be honest, I didn’t loooove it like I wanted to. I think that on a certain level I liked the idea of the book and was excited by the attempt to try something new in terms of writing style, more than the actual book itself. I admit there are times when the chopping and changing of the story is a little annoying. But, it is worth persevering, because I think that the point of this book is that it is meant to be read/viewed as a whole, something that you can’t do until you actually finish it. It is good, and like a good strong cup of coffee, although bitter, and if you’re like me a drink it without sugar, it can be a little rough sometimes. But the feeling you have afterward is worth every word.