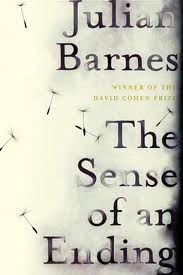 I read the other day that the Man Booker Prize  for 2011 had been awarded to The Sense of an Ending by Julian Barnes. It occurred to me that I had the book in ‘My Tower of Shame’, I decided it was time to see what the fuss was about. The only thing that stopped me reading this in one sitting was that I had to go to sleep to get up for work the next morning. Unlike some books that win various prizes, that when read leave you wondering what the judges were thinking, this book is excellent.

It is in a sense a memoir, but not. It is about history, the personal kind, and the fallibility of memory for the reliable retelling of our stories. It is the story of Tony Webster, now in his sixties. He is remembering the key moments in his youth. His friendship with boys he met at school, and most notably that of Adrian, the boy who came to the group late, and whose high opinion the other sought. He remembers the first woman he loved, and the lasting effect that his own interpretation of the memories of that time have had on him. It is also about suicide, and divorce and being a father, and of life continuing on and on to its inevitable conclusion. He talks about how when we are young, we are ‘still waiting for life to start, not realising that it has in fact already begun’. Then in our middle age we realise that the opportunities to effect any real change in our lives has gone, and that this is probably ‘it’.

I just finished reading this morning, and I confess that a lot of it has probably gone over my head, and I won’t get it until after, when I’ve had a chance to ruminate and mull over it. But, that in itself is a measure of how superb this book is. So many books are fine, and a good way to pass the time and escape from reality for a while. There is nothing wrong with that, in fact it can be a pleasure in and of itself. But, great literature is the kind that stays with you for months, if not years later, while you try to figure out the enigma of it.

A great book and a worthy winner, and at no more than 150 pages a quick and satisfying read. Well worth picking up.

4 Replies to “The Sense of an Ending- Julian Barnes”