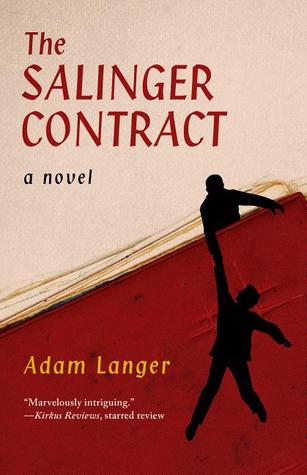 I was a little disappointed when I started reading The Salinger Contract when I found, pretty early in the story, that this tale has little to do with J.D. Salinger, except as a hook upon which the real story is attached to. However, my disappointment was only short lived because the book that is actually on offer here is a great story, and an interesting thriller that will keep your attention through to the unexpected, but not wholly unbelievable conclusion.

The narrator, Adam Langer, is a stay at home dad in Bloomington, Indiana. He had previously worked as a editor on the now defunct literary magazine Lit, and he has one novel to his name. A novel  broadly based on his own search for his absent father, and which caused a rift between he and his mother.

While wondering through a soon to be closed down Borders in Bloomington, he sees that one of his favourite authors , Connor Joyce, whom he interviewed some years ago for the magazine, is doing an in-store appearance. He decides  to hang around and see him, not thinking for a moment that Joyce will remember him. But, as it turns out the attendance for the reading is pitifully low, and Joyce not only remembers him, but insist on going for a drink after.

Langer assumes that will be the last he hears from him, only to get a strange call from Joyce the next day. In a clandestine meeting in the local Hilton’s swimming pool- to avoid any possible bugging devices, Joyce tells Adam the most fantastic story he has ever heard, insisting that it is true.

It seems that in the short time since their reunion the previous day, Joyce had travelled to Chicago as part of the book tour.  While he was there he met a mysterious, and vaguely frightening character, Dex Dunford and his Eastern European bodyguard Pavel. He is given a tantalising offer. Dex is a collector, and his collection of thrillers written by all the world greatest writers, the twist is that each of the books has been written so that only he will ever read them. Joyce is shown a library with books written by Norman Mailer, Truman Capote, Harper Lee and J. D. Salinger. Joyce is offered 2.5 million dollars to write a thriller for Dex. The only condition is that know one else can read about it, and he cannot mention the deal to anyone, ever, or he must pay back all the money.

What follows is a interesting psychological thriller where the ethics and the responsibilities of being a writer are examined. When a writer puts a novel out there, are they responsible for whatever ideas they engender in their readers, and any subsequent behaviour that comes as a result. When Mark David Chapman was found to have a copy of Catcher in the Rye when he assassinated John Lennon, or when John Hinkley Jnr attempted to assassinate President Ronald Reagan also carrying a copy of that book; is it reasonable to place any blame at the feet of the author? Did Salinger feel anything at all to know that his writing was the inspiration for such terrible acts?

This is a good book. The story is compelling and it kept me guessing to the end. If I had any criticism it is that Langer (the author not the narrator) rehashes the list of great authors to often. It seems that whenever one of the characters has cause to mention even one of the authors that have previously worked for Dex it is apparently necessary to list them all, every single time. But, that is a minor irritant which shouldn’t retract too much from your over all enjoyment of what is an entirely original thriller.